I met Beth Splaine last summer at the writer’s retreat where I was working on Mayflower Chronicles: The Tale of Two Cultures. Each evening we read portions of our work, so she was aware of my efforts to retell this famous story as a historical novel, with special emphasis on the perspective of the Natives and women. As a result of that event, I signed a contract with Green Writers Press to publish the book. After several edits, we are close to printing the book; but I wanted one more reader with Native heritage to read it first, to catch any glaring offensive things I might have unintentionally included. After several failed attempts to find such a reader, I asked Beth, who lives in Rhode Island, if she knew anyone. Bless her – she sent out my request through the Nextdoor Neighbor app. 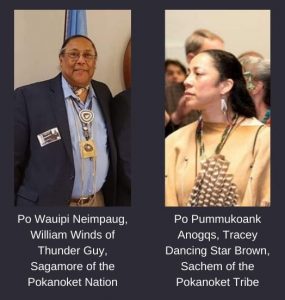 And that is how I met Po Pummukoank Anogqs, also known as Tracey Brown, of the Pokanoket Nation. And daughter of Neimquag, also known as William Guy, the Sagamore of that nation. As if all that weren’t exciting enough, her family heritage traces directly back to Ousamequin, commonly known in the history books as Massasoit. That is his title, not his name. It was this great leader who called on the newly arrived English settlers as they were establishing their Plimoth Plantation on the site of the village left abandoned by the Great Dying only a couple of years earlier. Tracey and I talked. Twelve generations later – two descendants of two families that played key roles at the start of what has became the United States. We talked. Two women with overlapping family histories and a shared passion for working for justice and peace among people of different cultures. 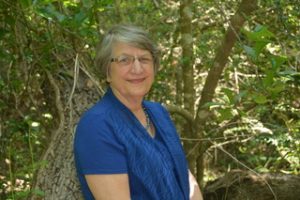 I am a twelve-generation descendant of William and Mary Brewster, two of those refugees. While I do not know how many generations are between Tracey’s family and Ousamequin, I suppose about twelve. Her ancestors and mine met four hundred years ago in modern Plymouth, Massachusetts. They and others from both cultures sat together one March afternoon to negotiate a treaty. They worked out an agreement that they would help one another, come to one another’s aid, and hand over for punishment anyone from either group that did wrong to the other group. Both communities honored that treaty for a generation.

But as more and more immigrants arrived things shifted for the worse. Newer arrivals did not honor the treaty or the Pokanoket people. Eventually the situation erupted in war. Tracey straightened out my understanding of some of the details of that horrific King Philip’s War. King Philip’s name was actually Metacomet, Ousamequin’s son, and also Tracey’s ancestor. The Pokanoket people were badly defeated and the survivors forbidden to use the name of their nation. Some reformed as the Wampanoag Nation. Others were hauled away as slaves.

The descendants of some now live in the same neighborhood as the friend I met while writing a story about both our family histories. Now, twelve generations later, we’ve met by phone. I am humbled and honored to now know about Tracey and her family.

A Belated Thank You and Apology

But I am also deeply saddened to think that likely some of my ancestors fought against some of yours. That people of my heritage did not always see the value of mutual cooperation and community. That they did not appreciate the long and rich history of your people. That they did not appreciate the ways your people have cared for the earth and lived together in communities for thousands of years before our families met.

Having now met you, at least by phone, I am encouraged that perhaps our generation can make progress toward once again living together in peace and mutual respect. I pledge to you that I will do all that is within my power to set the record straight; to give your people the credit you well deserve for your part in my family’s and our nation’s history; to tell the story as fully and accurately and honestly as I am able.

Twelve generations later, on behalf of William and Mary Brewster and all those who traveled on the Mayflower with them, thank you. May there once again be a lasting peace between my family and yours. May that peace be contagious. May mutual respect spread until all our children, grandchildren, and their grandchildren are infected with a spirit of respect, honor, and appreciation for one another’s histories and communities.

And thank you Beth Splaine for this introduction.

If you enjoyed this blog, you might also enjoy this one: Massasoit Ousamequin

Thank you for taking time to read this guest blog. I hope it inspires you to meet more of your neighbors. If so, why not share it with a friend? Got this from a friend? You can sign up for your own free subscription at HowWiseThen. I am always looking for leads about people making a useful contribution to our global village. If you have someone to recommend for a future HowWiseThen blog, let me know.
I have a variety of ‘thank you’ resources waiting for you at my website.